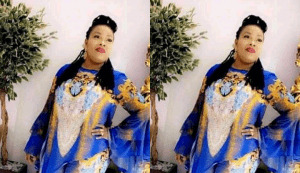 A new report has revealed that former fetish priest Nana Agradaa now Evangelist Oduro, has allegedly been arrested by the Ghana Police Service at her residence.

According to a Facebook live video shared by vlogger Maame Ng3ge, the former fetish priest has been arrested.

The report reveals she has been taken to the police station.

During one of her shows she revealed that even though the exact reason for her arrest is not known, the. “Sika Gari” woman has been arrested with fully armed policemen.

The video is currently shared on the Facebook page of Maame Ng3g3.

Akon Vibes With Laruso For A Collaboration